Theater Review: “Noelle, A Christmas Cocktail in Two Acts,” puts a brilliant spotlight on the most egregious of the sad facts of life

Theater Review: “Noelle, A Christmas Cocktail in Two Acts,” puts a brilliant spotlight on the most egregious of the sad facts of life

SPECIAL TO THE PRESS

If it hasn’t happened to you yet, it will. It’s one of those inevitable things.

“Noelle, a Christmas Cocktail in Two Acts,” written and directed by Ara Barlieb and co-produced by Barlieb and Pamela McLean Wallace, is funny, sad and worth seeing, not just for the superb acting, but for the story.

The play, featuring the Crowded Kitchen Players, was presented Dec. 16 -19 at the Charles A. Brown Ice House, Bethlehem. The Dec. 17 performance was seen for this review.

Sharon Ferry is spectacular in the title role of Noelle Whitlock. Noelle is the dying matriarch of a dysfunctional family and the victim of a money-making end-of-life care system that can suck any potential for peace out of an elderly person’s last days. Ferry’s impressive acting skills take her smoothly from border-line dementia to sublime understanding. 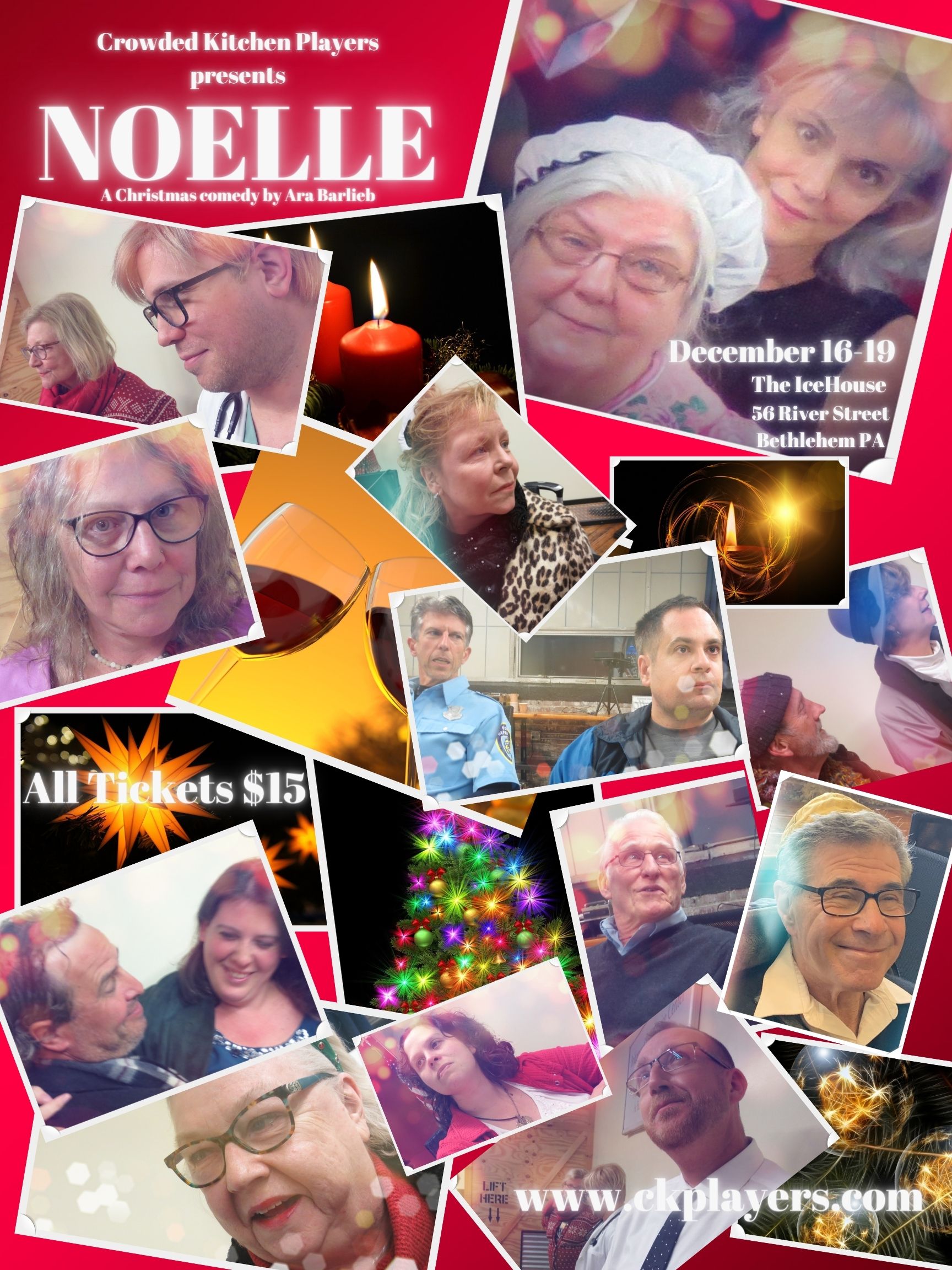 Rudy Whitlock (David Oswald) shows his broad range of talent as he goes from crude rich guy to being a distraught son who loves his mom (Noelle).

Kenny Nordstrom (Scott VanNortwick) shows immense talent as a jerk throughout the production as he goes from grabbing at pretty female family members to boosting loot from grandma’s house.

Kenny’s wife, Chrystal Nordstrom (Dawn Daignault) is entertaining in her constant efforts to keep her bumptious husband in check.

Max Rothenberg (Bruce Brown) is believable and charming as the altruistic neighbor and friend of Noelle who helps her decorate her home for Christmas and to be useful in many ways. But things aren’t always as they seem.

Trish Cipoletti is The Uninvited Guest. Cipoletti’s considerable talent is on full display as she eases the last hours of Noelle’s life, helping her find peace amongst the turmoil wrought by family squabbles and the bureaucratic machinery of the state.

Comic relief is brilliantly provided by Officer No. 1 (Dan Ferry), a police officer who thinks that drinking beer on duty is part of the job, and by Officer No. 2 (Billy Ehrlacher), whose quick-to-draw-his-gun approach to law enforcement is part of his persona. In spite of being funny, they highlight a heavy-handed approach to law enforcement that can be grossly inappropriate in responding to the elderly.

Lorraine (Alexandra Racines) shines as a caring, saintly social worker assigned to Noelle and is just as believable when she tells Noelle what she really thinks of her.

Vicky (Pamela McLean Wallace) is engaging as Rudy’s larcenous ex-wife who walks the line of being in the same room with Rudy’s new wife while stealing what she can from her former mother-in-law, Noelle.

Holly (Paula Klein) portrays a heavy-drinking daughter and brings a sense of comedic talent to her role.

Two of the most unsavory characters are also the most outrageous of this motley gathering.

Pastor Pretorious (Brian Wendt) is practically slimy as he insinuates himself into Noelle’s life as her spiritual solace and romantic suitor, but tries to wheedle her out of money in the form of donations for God’s work. Wendt’s versatile skill set lets him move seamlessly from being a respectable man of the cloth to being a huckster equal to any TV evangelist.

Equally outrageous for selling out the principles of his profession is Dr. Dorchester (Thomas Rush) who, in spite of the Manhattans, cocktails and nips from ever-present bottles, sees through his alcoholic haze just enough to officially certify the failing mental acuity of his patient, Noelle.

In “Noelle, A Christmas Cocktail in Two Acts,” Barlieb puts a brilliant spotlight on the most egregious of the sad facts of life when death is as the door of the elderly.

One only wishes that this wasn’t the only short run of the first “Noelle.”